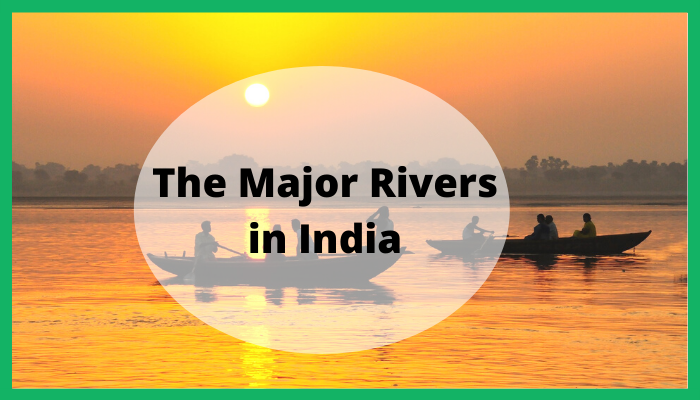 A. Himalayan Rivers System in India

(i) Ganga River System in India

The River Ganga is the longest and the main river of India. It is 2525 kilometers long and it flows through the states Bihar, Jharkhand, and West Bengal. The River Ganga is the most sacred river to Hindus. It is also a lifeline to many Indians-who live along its course and depend on it for their daily work. The River Ganga originates from Gangotri Glacier at Gomukh, Himalaya. The headwaters of Ganga is known as Bhagirathi. It joins River Alakhnanda at Devprayag and from here the river is known as Ganga.

The Yamuna is the second-largest tributary of the Ganga river. The Yamuna originates at Yamnotri and joins Ganga at Allahabad. The Yamuna is the longest river in India that does not directly flow. The rivers joining Ganga from the North are (i) Ramganga, (ii) Gomati, (iii) Ghagra ( Rapti joins Ghagra ), (iv) Gandak and Kosi. River Ghagra is the largest tributary of Ganga. The rivers joining the Yamuna from the south are Chambal. Now the tributaries of Chambal are Banas Parbati and Kailasind. Other tributaries of Yamuna are Sind and Betwa. The tributary of Betwa is Ghassan. Then it is ken and Tons. River Shon joins river Ganga. The tributary river Shon are Rihand and koel. In the West Bengal river, Ganga is joined by Damodar and Mayurakshi.

The next important Himmelen River is Brahmaputra River. It is one of the major rivers of Asia, which flows through China India, and Bangladesh. This river is 3840 Km long. River Brahmaputra is also called Tsangpo in Tibet. It Originates on the chemayungdung Glacier, located on the northern side of the Himalayas in Burang County of  Tibet.

When I say County is a geographical region of a country used for administrative or other purposes, in certain modern nations.

The Brahmaputra entered India in the state of Arunachal Pradesh. Where it is called Siang. In Assam s the river is called Brahmaputra. In Bangladesh, the Brahmaputra is mixed by the River Teesta then it is known as Jamuna.

Rivers Meghna in the initial stage is known as river Barak. River Surma when it turns South it is known as Meghna.

Well, the Indus River is 3,180 km long and this makes it one of the longest rivers in Asia. The river Indus originates in the western part of Tibet, in the vicinity of Mount Kailash and Lake Manasarovar. The river passes through Jammu Kashmir and before joining the Arabian Sea it passes through Pakistan. Indus River is the longest river and the National River of Pakistan.
Rivers Satluj is the largest Tributary river Indus. It originates from Rakshastal Lake in Tibet. This river flows through the states of Himachal Pradesh, Punjab, and joins Indus in Pakistan. The tributaries of Indus are (i) Jhelum, (ii) Chenab, (iii) Ravi, and (iv) Beas and in the northern part, the tributaries are (i) Shyok, (ii) Gilgit, and (iii) Zaskar.

(i) Mahanadi River System in India

River Mahanadi originates in Chattisgarh. It is a major River of Chhattisgarh and Odisha. The tributaries of ever Mahanadi are (i) Seonath, (ii) Hasdeo, (iii) Mand, (iv) Ib, and (v) river Tel.

After the river, the Ganga Godavari river is the second-longest river in India. It has its source at Trimbakeshwar. The main tributaries of river Godavari are (i) River Parvara, (ii) Puma, and (iii) Wainganga. The tributaries of Wainganga are Penganga and river Wardhas.

Krishna River originates in the Western Ghats near Mahabaleshwar. The main tributaries of Krishna are Bhima, Tungabhadra, Ghatprabha, and Malaprabha. Then it is river Penne and river Kaveri. The two important Westward flowing rivers of India are Narmada and Tapi. Narmada River is the longest westward flowing river of India.

List the Major Rivers in India and Their Origin