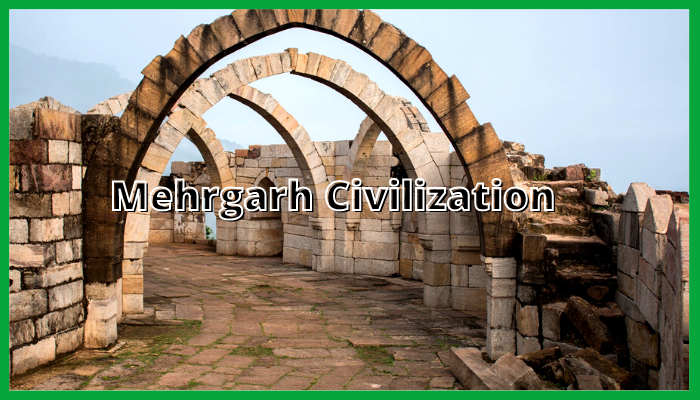 The ruins of Mehrgarh were discovered 5 km away from Quetta town on the banks of the Bolan River in Balochistan’s Kachchi plain. French archaeologists, led by Jean Frasoa Jariz, discovered the ruins of this Mehrgarh civilization. The main centers of this civilization are Kille Gul Mohammad, Kot Digi, Gumla, Mundigak, Rana Ghundai, Anjira, and Mehrgarh.

The data obtained as a result of the excavation work of Mehrgarh has provided some evidence of cultivation and evidence of trade relations with far-flung countries. Evidence from archaeological evidence is evident from the fact that the people here built houses and set up villages.

(B) Later on, the importance of agriculture and livestock increased. It was during this time that they began to use earthenware. Houses also grew in size. From these houses small objects of stone, wood, bone tools, etc. have been found. Among the items found in the tomb are the main pendant made of oysters, beads of beads and oysters, stone pendant, bone ring, polished stone kudus etc. People of that time used to cultivate barley, wheat, kul, palm, etc. The bones of deer, elephants, sapphires, wild sheep and goats, pigs, cows, etc. have been found in the animals. Cows, sheep, goats and possibly dogs were also domesticated. There was no livelihood or livelihood of the people here. He used to trade and trade. The marine oysters found here seem to have been traded along the coast. From the stones found in Mehrgarh, it seems that their trade extended at least to Turkmenistan. Weapons or accessories were made of stone. Although the use of the metal is unknown, a copper sculpture has been found from the tomb. A stone axe is found here.

The discovery of the Mehrgarh civilization is important for a few reasons. First, the evidence found in wheat and barley cultivation here suggests that the origin of these two crops was not imported from West Asia to India. Secondly, even though civilization was of the Neolithic era, metals such as copper and lead were not completely unknown. Third, people here used to trade with remote areas. Fourthly, there are masculinity and raw clay figures found on raw soil. However, it cannot be said exactly how much religion has to do with these idols. Finally, the discovery of this civilization proves that in the Neolithic period before the Indus civilization, Balochistan was a highly developed rural-based civilization in the region. For this reason, many have called this civilization the original Indus civilization.